Abdominoplasty (tummy tuck) procedures have become popular for skin sagging in the abdomen and belly area, as well as stubborn lubrication that refuses to go away despite diet and exercise. This surgery can easily remove stretch marks, lubrication, and sagging caused by regular weight gain and loss, as well as pregnancy. Mini abdominoplasty may be sufficient if the lubrication and sagging is limited to the area below the belly button. Because the recovery period is shorter and the operation time is shorter, mini abdominoplasty surgery is a more comfortable procedure. The amount of time it takes for a patient to recover varies depending on their physical characteristics and lifestyle. This type of surgery is now more successful thanks to modern technology. 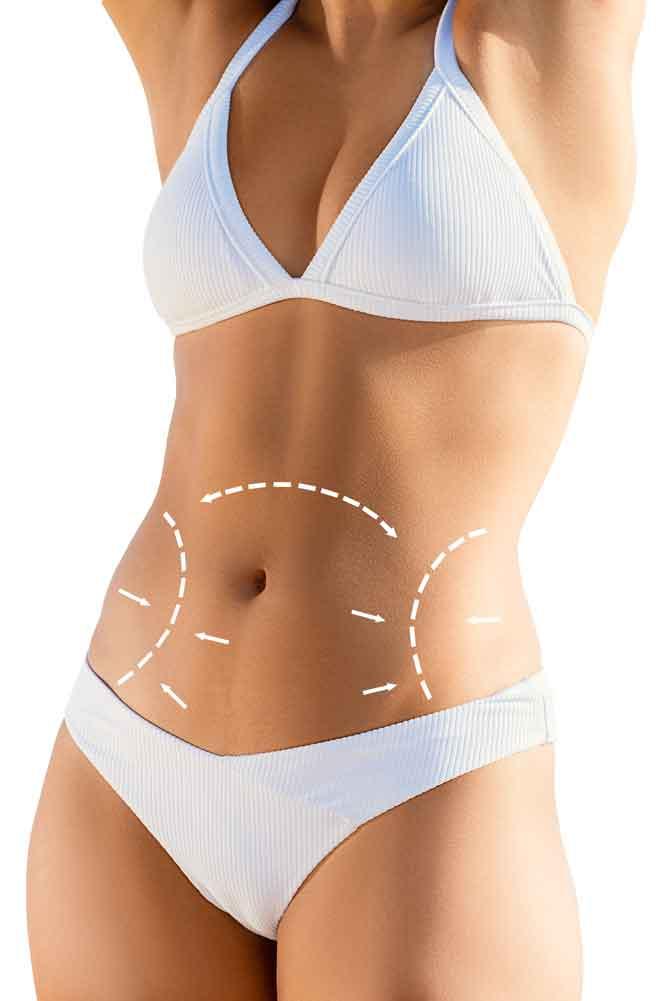 Tummy tuck surgery is abdominoplasty, which is a type of surgical procedure used to correct abdominal problems that cause an aesthetically unappealing appearance. It is one of the most effective procedures for abdominoplasty and belly fat reduction.

Deformations in the skin and muscles of the abdominal region occur after pregnancy, resulting in an unattractive appearance. Pregnancies that gain more weight than expected, as well as women who have given birth three or more times, are more likely to develop the deformation. Sports and diet will not be able to completely eliminate this deformity. The sagging abdominal skin is recovered, the excess fat in this area is removed, and the patient is easily provided with a flat stomach with abdominoplasty surgery, which solves this problem with only one operation.

What is Targeted with Abdominoplasty Surgery?

Abdominoplasty surgery aims to give the patient a flatter stomach and a younger-looking body. Liposuction surgery can be combined with abdominoplasty if fat is found in the waist and hip areas, as well as the belly and abdomen.

This surgery can also be used to correct sagging in the abdomen caused by old age, in addition to pregnancy and constant weight gain. Weight loss is observed as the muscles and skin in the abdominal region are made more tense, and as a result, 1-2 sizes of shrinkage are experienced after the surgery.

Who Are Suitable Candidates for Abdominoplasty?

Adult women and men who have sagging in the abdomen, fat accumulation in this region, and are unable to remove this accumulation through diet and exercise are good candidates for abdominoplasty surgery.

Despite these characteristics, it is not recommended for patient candidates who have chronic diseases and are not anesthesia-suitable. Chronic diseases that prevent blood clotting, such as diabetes, for example, are a significant impediment to this type of surgery. It is critical that the patient is free of these ailments in order for the wounds to heal, complications to be avoided, and the surgical procedure to be successful. What Should Be Done Before Abdominoplasty Surgery?

Patients who choose to have abdominoplasty surgery should adhere to the doctor's instructions regarding smoking, alcohol consumption, and vitamin and drug use. This is critical in determining the success of the operation's outcome. Smoking and drinking should be avoided for at least two weeks prior to surgery. If you get the flu or another illness during the pre-operative period, you should postpone the surgery. Sunbathing, calorie-restricting intensive diets, and excessive exercise are also not recommended during this time.

How is abdominoplasty surgery performed?

To highlight the underlying muscles, the skin tissue in the abdominal region is stretched from all sides towards the ribs and a large surface is lifted from its fixed position. The resulting abdominal muscles are sutured in their newly formed state and brought together in the middle. The skin on the upper surface is pulled down and stretched after these procedures. The belly button is stitched and fixed in its new location. During the procedure, a drain is placed on the surgical site to prevent unwanted blood and edema from accumulating inside. The blood and fluid in the wound can be drained through these tubes.

The patient usually stays in the hospital for 1-2 days after abdominoplasty. In most cases, patients are advised to wear a special corset. This corset, which should be worn for at least 30 days after surgery, is critical to the procedure's success. You can stand and walk with the assistance of a support 3-4 hours after the operation, and the next day after the operation, you can walk slowly without assistance.

Pain from post-operative procedures and stitches is to be expected. We recommend that you take painkillers if the doctor performing the surgery thinks it's necessary. After the surgery, you can take a bath and return to your normal routine quickly.

Because the stitches have not fully fused, movements like coughing and sneezing may cause discomfort during the first week after surgery. Because vigorously performing these movements can damage the sutures, it's best to avoid them as much as possible. The stitches on the skin's surface are removed after about a week, and the other stitches dissolve on their own because they are aesthetic stitches. After about a year, scar scars lighten gradually. It is not expected to vanish completely, however. However, because it is hidden beneath the bikini line, it is not visible from the outside.

If you do not work in a job that requires a lot of physical activity, you should be able to return to work in about 7-10 weeks under normal circumstances, according to your doctor's recommendations. These terms apply to full abdominoplasty (tummy tuck) procedures. The recovery time is shorter after a mini abdominoplasty, and patients can return to their daily lives in 3-4 days.

One of the most common questions asked by women considering abdominoplasty surgery is whether being pregnant afterward will cause complications. Abdominoplasty surgery is not a procedure that can harm a pregnant woman or cause complications during her pregnancy. It is, however, in the doctor's best interests to determine how long after the operation it is possible to become pregnant.

One of the most common questions asked by women considering abdominoplasty surgery is whether being pregnant afterward will cause complications. Abdominoplasty surgery is not a procedure that can harm a pregnant woman or cause complications during her pregnancy. It is, however, in the doctor's best interests to determine how long after the operation it is possible to become pregnant. 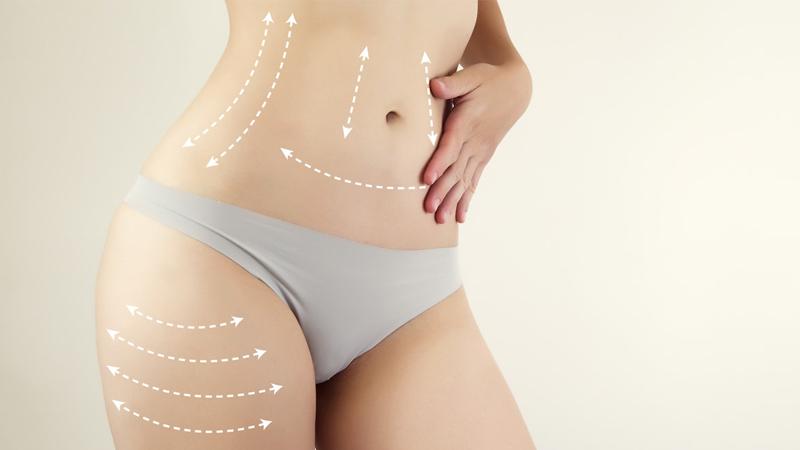 How long does the surgery take and how soon can I return to my daily life?

Abdominoplasty procedures usually take 1.5 to 3 hours. You'll have to spend a few days in the hospital. After the operation, a corset should be worn for one month. It is possible to return to daily life without heavy physical activity after an average of one week.

Constant weight gain and loss, genetic structure, and birth can all cause excessive fat tissue, sagging, and cracks in the abdominal region. These issues have a negative impact on the patient's self-esteem, and excessive sagging can result in skin wounds and fungal infections as a result of excessive sweating.

What is the type of anesthesia used in surgery?

The majority of surgeons who perform this procedure prefer general anesthesia. Others use a combination of local anesthesia, pain relievers, and sedatives.

Will there be any scars after tummy tuck surgery?

Tummy tuck surgery will leave scars. This scar, however, will be adjusted to remain beneath the belly button and will fade over time, so it will not be visible from the outside.

How many days should I stay in the hospital after the operation?

Abdominoplasty is usually followed by a two-day stay in the hospital. However, depending on your additional diseases or the removed tissue, this period varies from patient to patient.

Are there risks to the surgery?

This procedure, like any other surgical procedure, carries some risks. These risks vary depending on a variety of factors, including the patient's age, whether or not he smokes, genetic factors, and other diseases. As a result, after consulting with your doctor about the risks, it is beneficial to learn the risk ratios that are appropriate for you.

Can there be excess skin and lubrication again?

Recurrent problems are caused by conditions such as constant weight gain and loss, as well as re-pregnancy.

Abdominoplasty/Tummy Tuck Before & After Photos 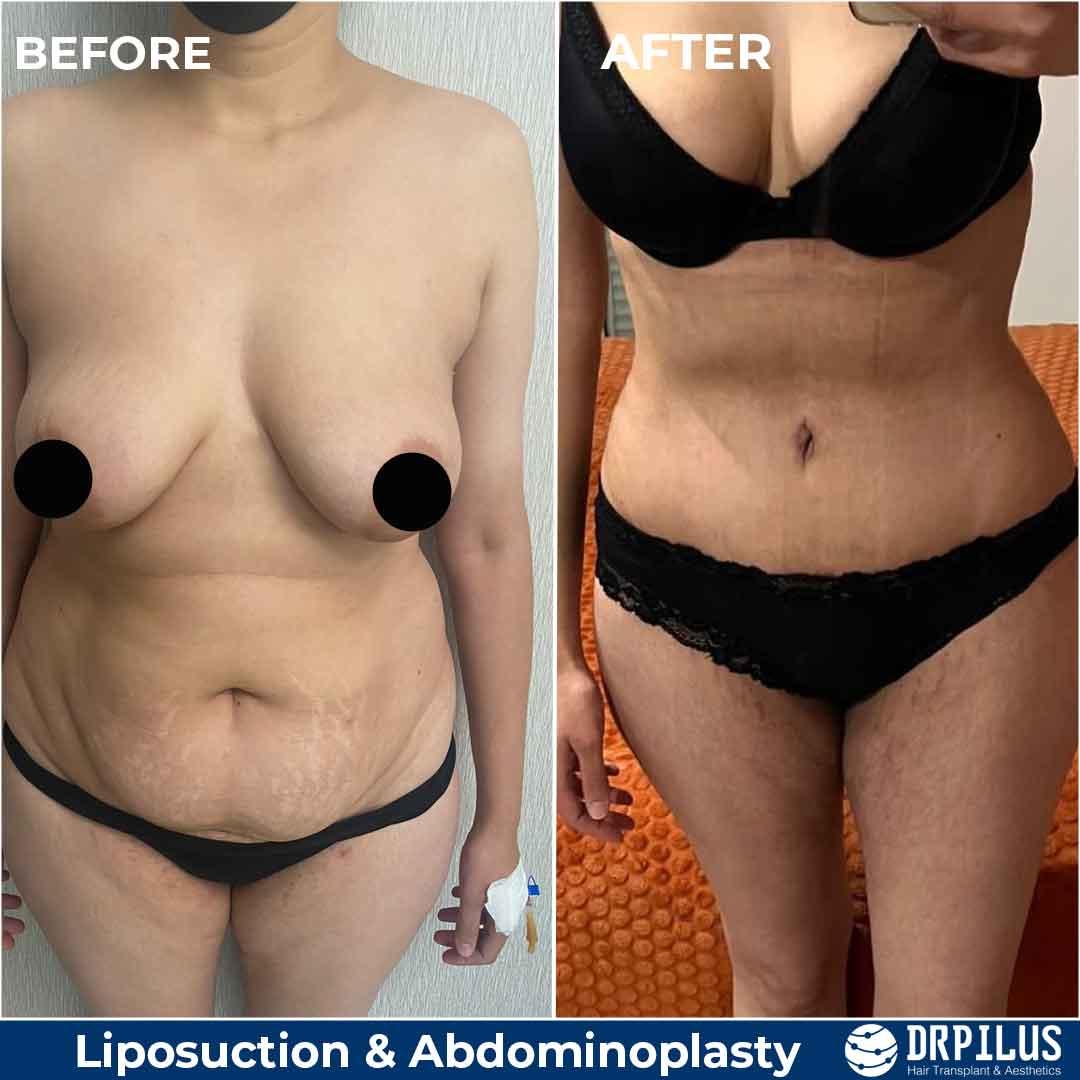 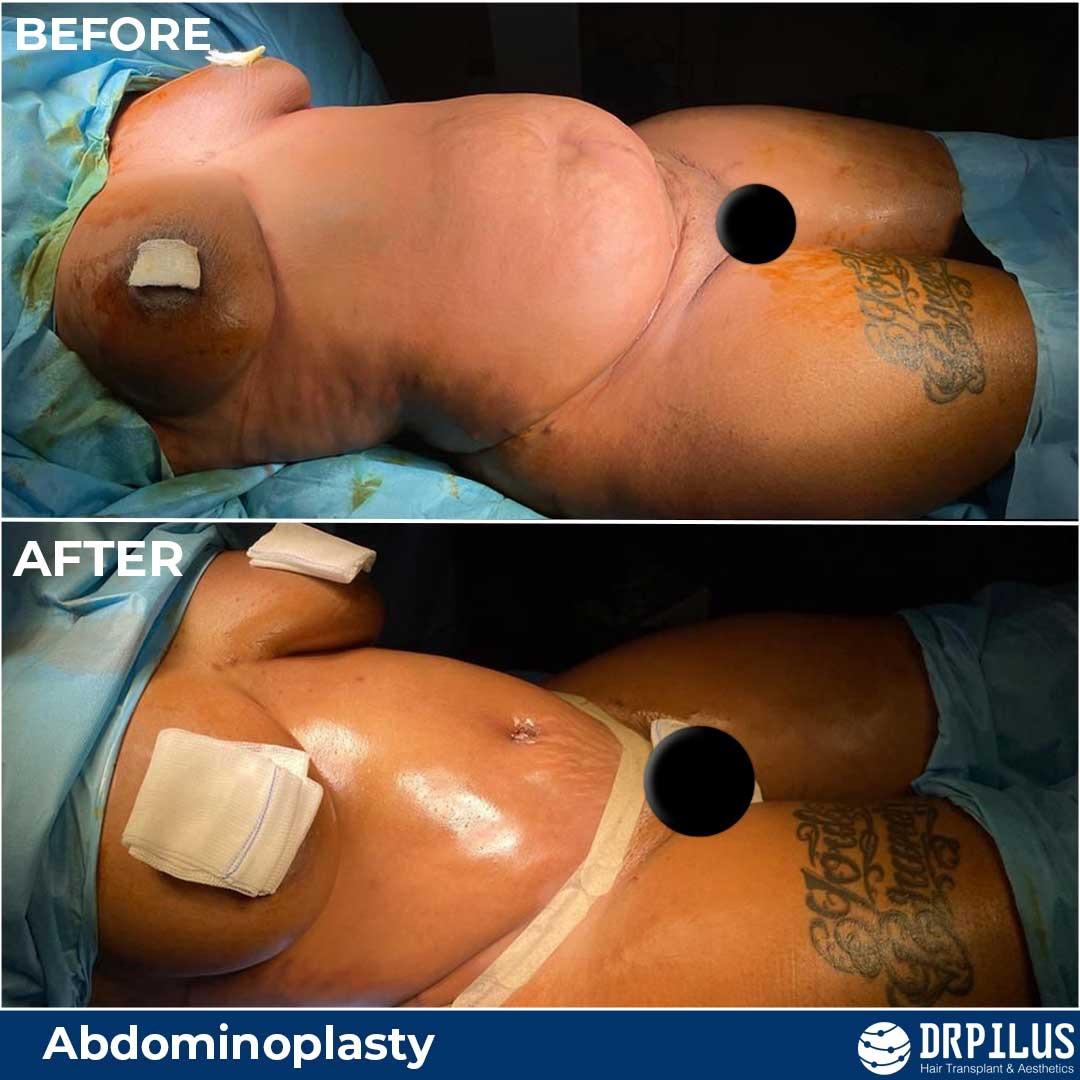 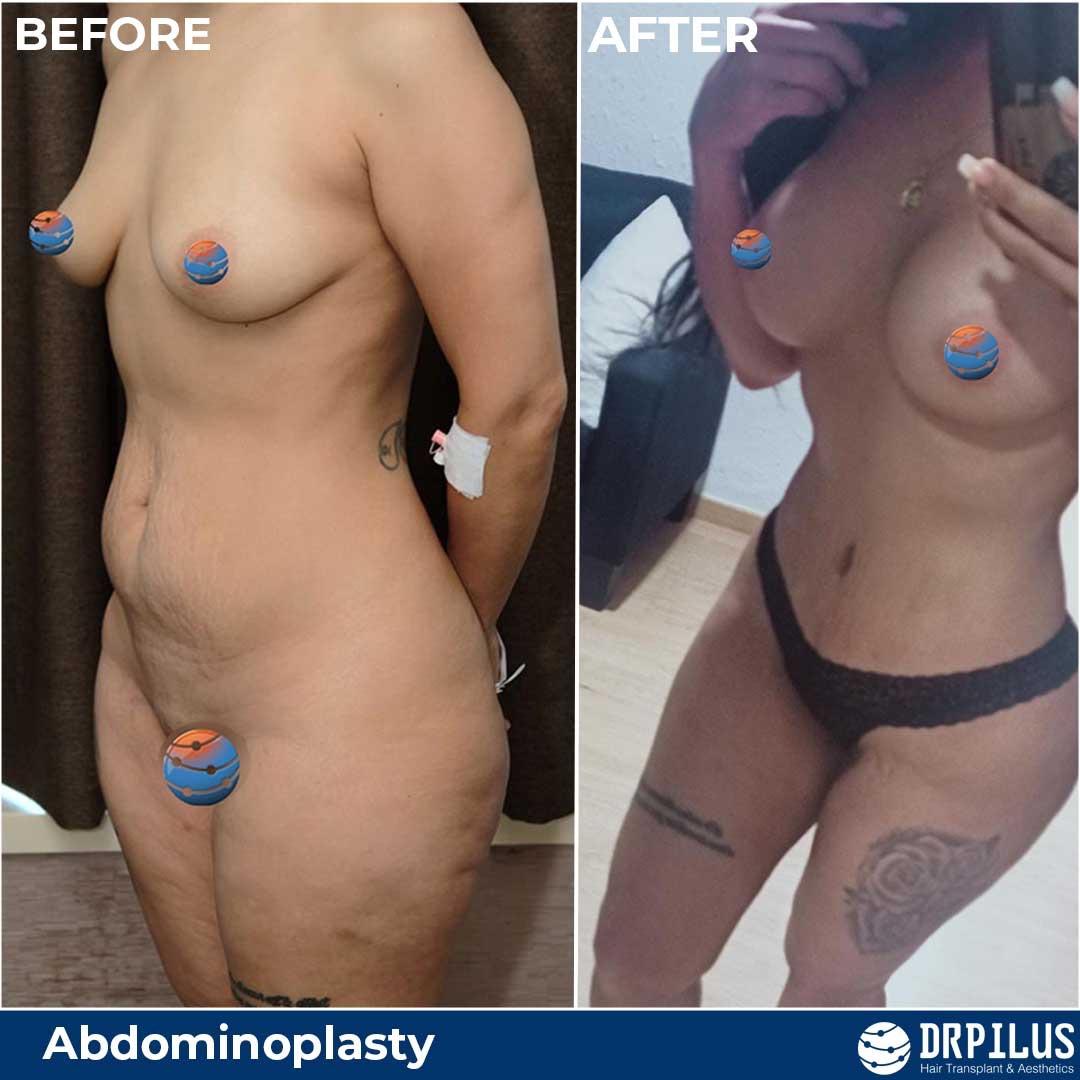 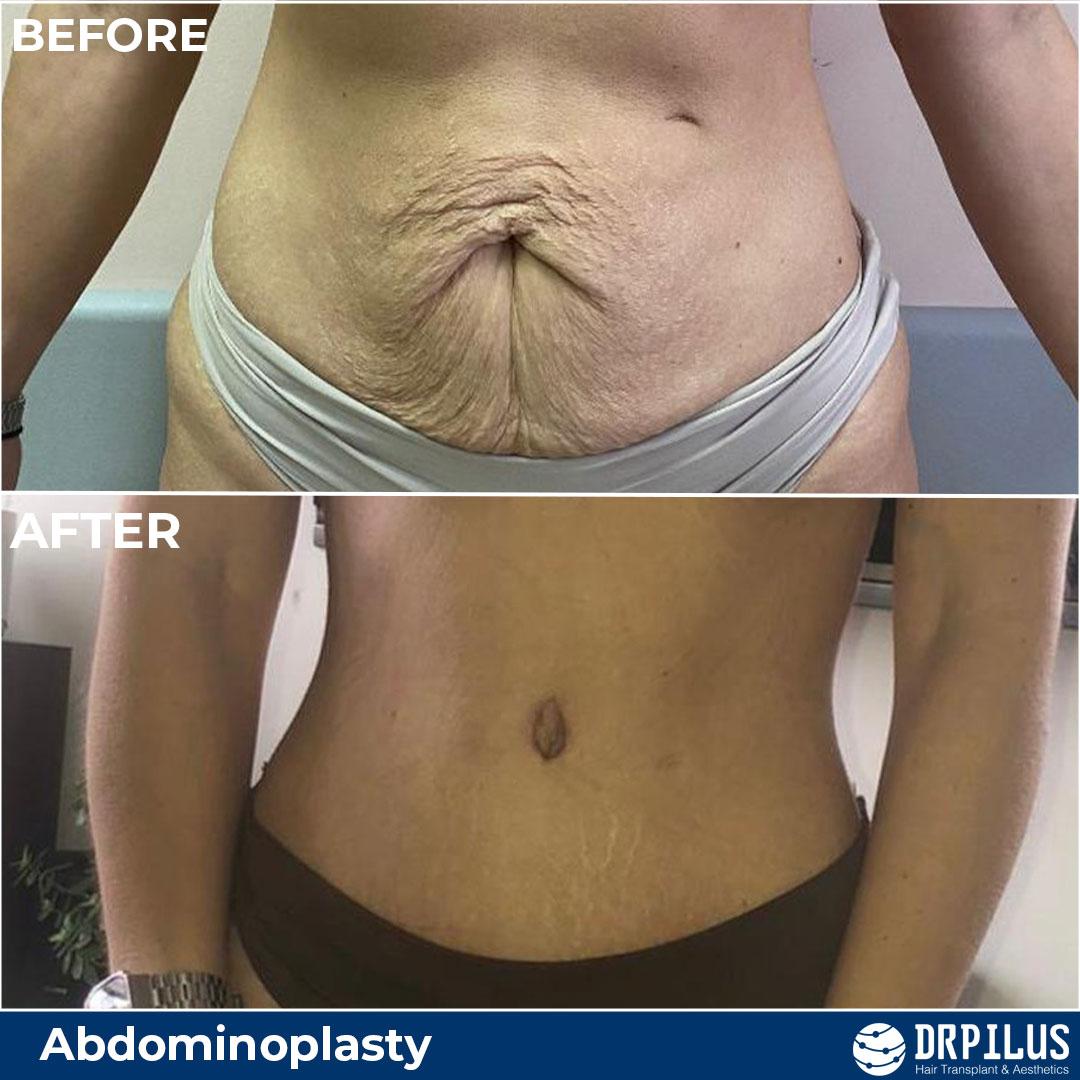 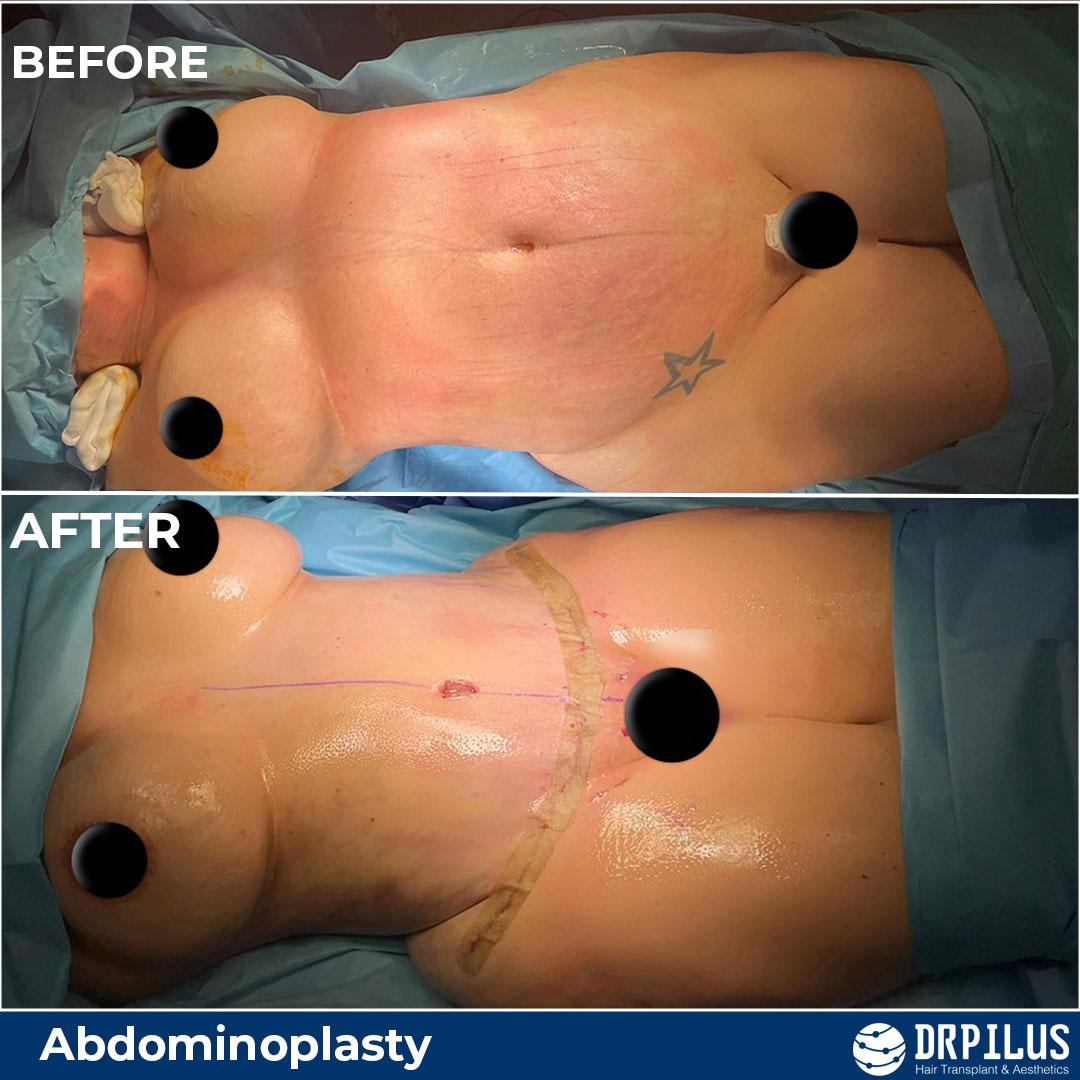