What is Prominent Ear?

The term "prominent ear" refers to when the ears protrude more perpendicularly from the head than they should, and are especially visible when viewed from the side or back. It can be seen in a variety of ways and to varying degrees. In the community, it affects 5% of the population. It can affect both ears or just one of them. This situation is not harmful to the person's health, but it can cause him to be self-conscious about his appearance.

It cannot be corrected without surgery, with the exception of the early neonatal period. Otoplasty refers to the procedures used to correct a prominent ear appearance.

Before undergoing otoplasty (pronounced ear) surgery, a thorough examination should be performed. During this evaluation, it is critical to fully comprehend the root of the patient's problem and to apply surgical procedures in such a way that all of the patient's issues are resolved.

How is Otoplasty Surgery Performed?

Because the cartilages are softer at this age, the first technique is to use stitches to shape the auricle. Other techniques are better suited to the needs of older people. If the patient's problem is caused by advanced conchal cartilage development, the technique of partial cartilage removal, which is usually the last option, should be used.

All of these techniques are carried out using one of two methods: open or closed. Techniques that are open Otoplasty is a popular procedure. A small incision is made behind the patient's ear in this method. The incision is then closed with a permanent suture and an intervention is performed based on the patient's problem.

Because these stitches are permanent, there is no need to remove them afterward. After that, both ears are covered with a bandana called a tennis band. This band is worn for about a week following surgery. It is only worn while lying down for the next week. The stitch marks will be hidden behind the ear, so there will be no visual issues. The recovery period is limited to two weeks, after which the patient can return to work.

Without making an incision, special tools are inserted behind the ear and stitches are placed on the part to be corrected in closed technique otoplasty surgery. This allows for the necessary aesthetic shaping. Although this method is not appropriate for every patient, it can produce excellent results in those who are. It's a very useful and quick recovery method.

When is Otoplasty Surgery Performed?

Is there a non-surgical treatment option for prominent ear?

In the newborn period, the auricle can be shaped with bandages or molds for the first six weeks after birth. As a result, taping is recommended when other visual problems, such as a prominent ear or auricle folding, are discovered in the period immediately following birth. This method, which has a high chance of success in the beginning, loses a lot of its effectiveness after six weeks.

Following otoplasty surgery, there is no significant pain. If the surgeon thinks it's necessary, he'll give the patient some pain relievers.

Following the otoplasty procedure, the operated ears are wrapped in a bandage, which is changed several times during the first week. Depending on the situation, it is also removed.

If stitches are used during surgery, they are removed during the first week of control. For the first two weeks and the first month after that, it is critical to use a bandage or headband to keep the ears in the proper position while the patients lie down.

After surgery, tissue healing usually takes two months. The auricle should be protected from pulling trauma for six months, especially in surgeries where the ear is shaped with stitches.

Is There a Risk of Otoplasty Surgery?

Otoplasty surgery is generally considered to be a low-risk procedure. Blood collection and infection in the operated area are common problems in the short term after surgery. Simple treatments are available to address these issues.

The formation of asymmetry in the ears or the reoccurrence of the prominent ear appearance over time are problems that can be seen in the mid-long term after surgery.

Surgical intervention is usually required to resolve this uncommon problem. As a result, it is critical to conduct a thorough examination prior to surgery and to employ appropriate surgical techniques.

Otoplasty, a simple plastic surgery procedure with few risks, should be performed under hospital conditions by a plastic surgeon who is an expert in the field.

What is the price of otoplasty surgery?

The cost of otoplasty surgery varies depending on the ear deformities and the clinic where the procedure will be performed. By contacting us, you can obtain the most up-to-date information on otoplasty surgery costs.

The prominent appearance of the ears, which is an important part of facial aesthetics, can both aesthetically disturb the patient and cause psychological trauma. A prominent ear condition that develops as a result of a genetic predisposition can be permanently resolved with otoplasty, or prominent ear surgery.

Will the ear be opened after otoplasty surgery?

To protect and support the ears after surgery, dressings and bandages will be applied. There may be opening after prominent ear surgery if the bandages are not used on a regular basis. As a result, it's critical to use bandages after surgery.

When do the stitches melt after otoplasty?

The sutures used in the surgery are self-dissolving and will dissolve in one week. Swelling can last up to ten days after ear surgery. Activities should be avoided for 1.5 months to avoid ear bending. In most cases, adults can return to work in 5-7 days.

Otoplasty surgery is considered a low-risk procedure. Blood collection in the operated area (hematoma formation) and infection are the most common problems seen in the short term after surgery. 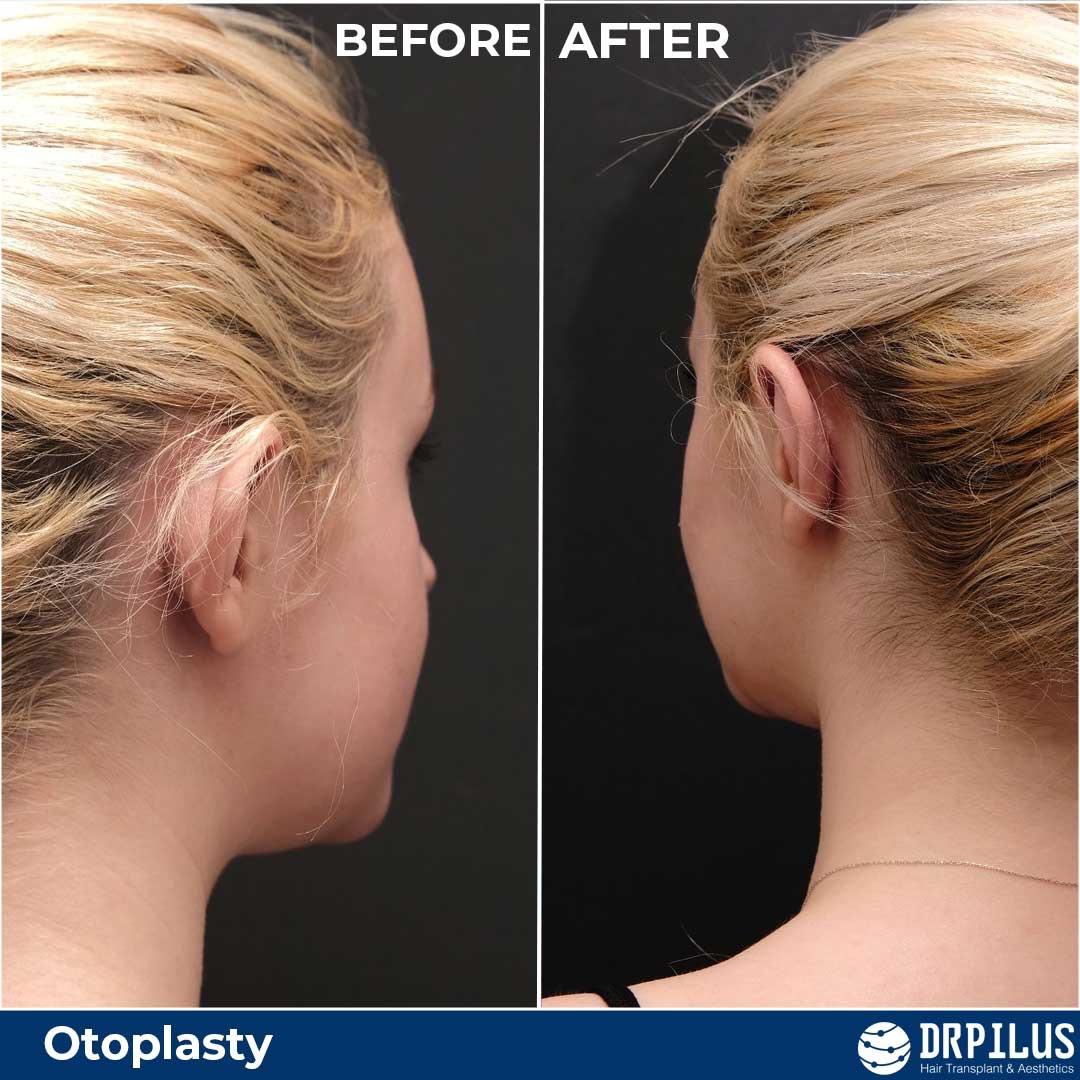 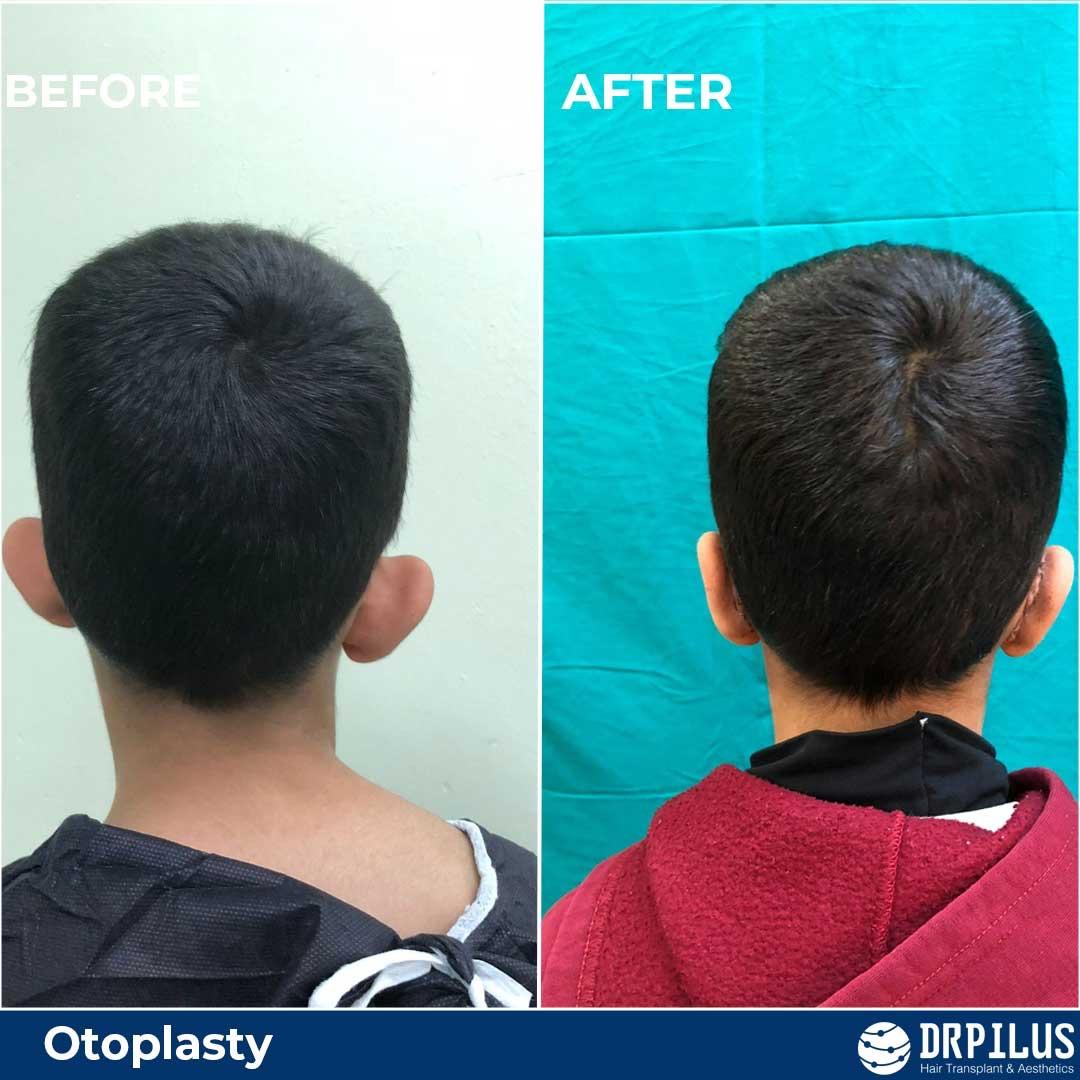